Maternal Transfer of Mercury in Turtles

HomeMaternal Transfer of Mercury in Turtles

Mercury (Hg) is among the most problematic environmental contaminants globally because of its environmental ubiquity and associated toxicity to humans and wildlife. Turtles possess several traits, including longevity, ectothermy, and various feeding preferences that make them good models for studying Hg bioaccumulation and biomagnification. However, the toxic effects of Hg exposure in turtles have received significantly less attention compared to fish, birds, amphibians, and aquatic mammals.

With many turtle populations declining, euthanizing adults for scientific study is neither sustainable nor conservation-minded, and efforts must be made to implement new non-lethal methods. Development of non-lethal methods will allow researchers to simultaneously collect larger sample sizes while minimizing effects on wild turtle populations. Additionally, for bioaccumulative contaminants, non-destructive sampling techniques will enable investigators to repeatedly sample the same individual to monitor its exposure throughout its lifetime. Sampling multiple tissues will allow researchers to build mathematical correlations between less invasive samples (e.g., nail and blood)  to concentrations that can be accumulated in tissues (e.g., muscle and eggs) that are often relevant to overall health, reproductive success, and transgenerational effects attributable to maternal transfer.

Mercury has been shown to maternally transfer from females to their offspring in a variety of vertebrates. As a result, Hg exposure can decrease reproductive output, reduce hatching success, and have lethal and sublethal effects on offspring. While the effects of maternally transferred Hg have been demonstrated in several vertebrate species, nothing is known about the reproductive effects of Hg in turtles.

For this project, we developed and validated non-destructive sampling techniques for assessing mercury bioaccumulation, maternal transfer, and consumption risks in turtles so that future monitoring studies can be performed sustainably. In doing so, we also described demographic, spatial, and temporal factors that influence Hg bioaccumulation in turtles. Finally, because of the known deleterious reproductive effects associated with Hg exposure, we aimed to determine whether Hg exposure negatively affected turtle reproduction and offspring development.

We collected painted turtles (Chrysemys picta), stinkpots (Sternotherus odoratus), and snapping turtles (Chelydra serpentina) inhabiting an Hg contaminated gradient at a historically contaminated river located in central Virginia, the South River, and from nearby reference rivers. These three species differ in their feeding ecology, allowing the assessment of trophic position on Hg exposure. For all species, we collected blood, nail, and egg tissues to formulate mathematical models between female tissue concentrations and those that are maternally transferred to her offspring. In addition to the these three tissues, we also took a small muscle biopsy from adult snapping turtles so that we could quantify mercury bioaccumulation within muscle tissue that may not only have consequences for turtle health and reproduction but human consumption as well.  From these tissues, we described important demographic, spatial, and temporal factors that influence Hg bioaccumulation in turtles.

To understand the effects that mercury exposure may have on turtle reproduction, we collected eggs and tissues from captured gravid females. We incubated eggs in the laboratory, quantified embryonic morality, infertility, and hatching success of each clutch, and assessed all hatchlings and dead embryos for gross morphological malformations.

We demonstrated that minimally invasive tissues can be used to sustainably monitor Hg bioaccumulation and predict Hg concentrations maternally transferred to eggs, which has implications for turtle health and reproduction. Total Hg concentrations in all turtle tissues were strongly and positively correlated with each other. Additionally, we sampled turtles from two other rivers in VA and demonstrated that our mathematical models describing the relationships between tissues sampled from snapping turtles inhabiting the South River are applicable to those from other Hg contaminated sites, providing a strong foundation for future sustainable monitoring programs. In collecting information on current Hg concentrations, we demonstrated several important spatial, temporal, and demographic patterns in bioaccumulation that may be important factors to consider when evaluating consumption risks, and developing future monitoring, restoration, and mitigation programs for Hg contaminated systems.

Adult snapping turtles inhabiting contaminated portions of the South River are the highest to ever be reported in turtles within the United States.  Not only were these concentrations associated with deleterious fitness consequences, but they also pose potential risk to humans that harvest contaminated turtles as a food resource. However, there are no local or statewide regulatory guidelines that provide safe consumption limits for eating turtles collected from Hg contaminated areas in Virginia. Ideally, our non-lethal techniques can be used to monitor Hg bioaccumulation in a sustainable manner and provide useful information for regulators in determining safe consumption limits for turtles not only inhabiting the South River, but throughout the state of Virginia. 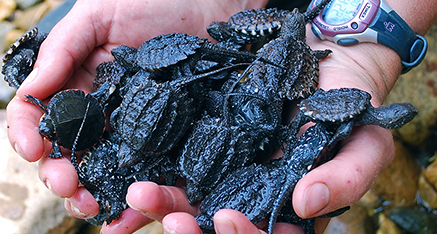 While the lethal and sublethal effects of Hg exposure are documented in birds, fish, and mammals, the influence of Hg exposure on adult and offspring survival and phenotype is poorly understood in herpetofauna. Understanding Hg bioaccumulation and maternal transfer of Hg is important for assessing the health of turtle populations living in Hg contaminated areas and also protecting humans and other predatory wildlife that consume turtles. The non-destructive sampling techniques we developed will be critical for sustainable monitoring of Hg bioaccumulation and associated health risks in turtles.

For more information regarding the effects that mercury can have on turtles, please read about our ongoing turtle research here.